In these uncertain times, working with reliable kit you can depend on is more important than ever.

When you purchase a piece of AJA technology you’re buying much more than just hardware. AJA’s legendary support, software and warranty go hand in hand with their products. AJA's long warranty periods on products is testimony to the confidence they have in everything they manufacture.

With limited amounts of crew allowed on set it's vital for production teams to be able to rely on their kit. AJA products offer peace of mind that your workflow won't let you down.

Here’s our pick of the most popular AJA HDMI mini converters: 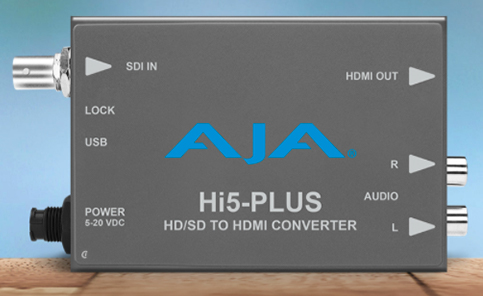 Hi5-Plus is AJA’s next generation SDI-to-HDMI Mini-Converter for integrating HDMI monitors into professional SDI workflows. Bring HDMI and 3G-SDI devices together for a full range of monitoring and recording solutions in the edit suite, on set or at live events. Convenient USB setup using AJA MiniConfig on Mac or PC for easy remote configuration.

When used with a compatible HDMI monitor, Hi5-Plus outputs a 30-bit Deep Color RGB signal that allows for incredible color representation. The 3G-SDI input on Hi5-Plus allows extremely high-quality signal representation through to the HDMI output for use with RGB workflows where image quality is critical. 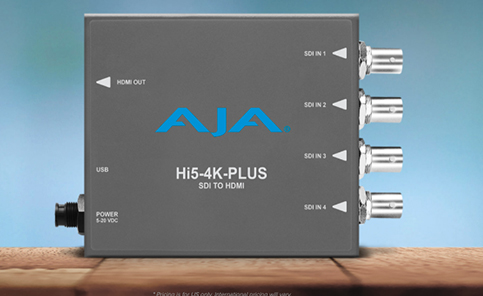 AJA’s Hi5-4K-Plus preserves your vision with pristine image fidelity and HFR support up to 60p for 4K/UltraHD SDI to HDMI 2.0 conversion needs. The Hi5-4K-Plus can also generate HDR metadata in accordance with HDMI v2.0a/CTA-861.3 and includes HLG support. 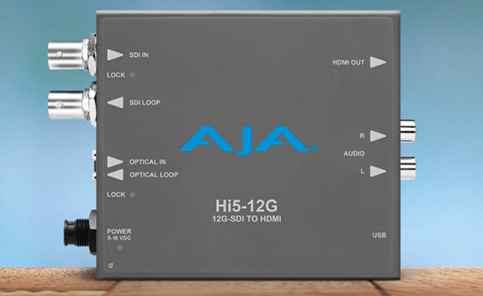 The Hi5-12G converts 12G-SDI to HDMI 2.0, with pristine image fidelity and HFR support up to 60p for 4K/UltraHD, with single cable simplicity. Hi5-12G provides an easy to deploy monitoring connection from professional 4K 12G-SDI devices to new displays with HDMI 2.0 inputs, for cost-effective monitoring in professional workflows. The Hi5-12G can also generate HDR metadata in accordance with HDMI v2.0 and CTA-861-G.

It features a 12G-SDI single link input with a reclocked SDI loop out for simpler SDI confidence monitoring or pass on for SDI pipelines.

Fiber SFP equipped Hi5-12G models are available including the Hi5-12G-R receiver, which can receive 4K signals over long distances from a Fibre connected source, and the Hi5-12G-TR transceiver, which delivers a 4K/UltraHD SDI or Fibre source signal to an HDMI destination with pass on of the source through SDI or Fibre to a secondary destination. The Video Source Auto Switch Over feature (SDI and Optical Inputs) in Hi5-12G-R and Hi5-12G-TR provides automatic input changeover with configurable Switch Over Priority selection (Last Valid Input, Priority SDI, and Priority Optical). 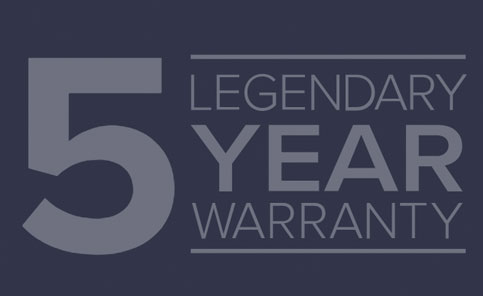 AJA Mini-Converter products are covered by a generous five year warranty. Please see the individual product manuals for additional specifics around warranty conditions for the product itself.