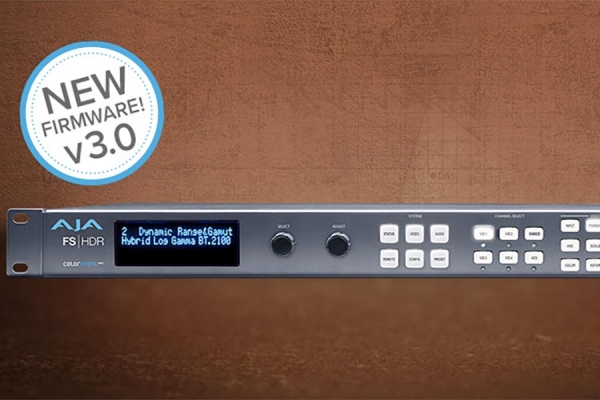 "We continue to be impressed by the various ways that FS-HDR is being implemented in workflows around the world, and want to expand those possibilities by bringing customers meaningful updates," shared Nick Rashby, President, AJA Video Systems. "FS-HDR v3.0 is a continuation of our efforts to bring new tools to professionals embracing HDR who may also still have SDR deliverables, and is packed with customer-requested features that align with evolving HDR standards and formats."

"Extending the integration of LiveGrade Pro and AJA FS-HDR is the result of a great collaboration," said Patrick Renner, Product Manager, Pomfort. "With the new integration for the FS-HDR multi-channel mode, LiveGrade Pro can now control four independent channels in the device. The combination of FS-HDR and LiveGrade Pro is the ideal solution for customers looking for a compact, rack-mount solution for multi-camera and multi-monitor setups."

FS-HDR v3.0 will be available June as a free download from AJA’s website. FS-HDR is available now for $7995 US MSRP. For more information, visit: www.aja.com/products/fs-hdr.