Streaming Made Easy with DigiBox 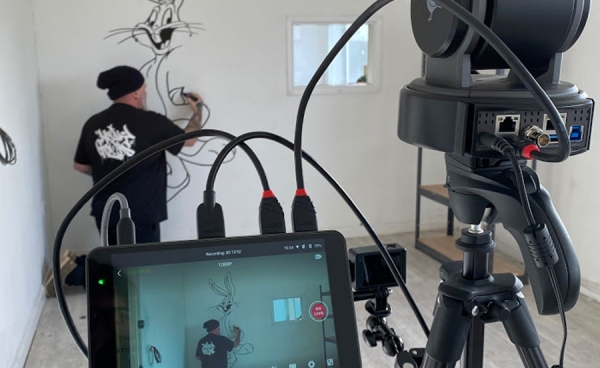 Streaming Made Easy with DigiBox

It has never been easier to set up a live stream. Find out how a YoloBox and AJA's U-Tap helped commercial artist @MrMeana76 share his work on FaceBook Live.

SET UP TIME: Less than an hour

The YoloBox is a video audio switcher that can cut and transition between multiple sources, including graphics, which is controlled using an impressive, bright 7” touch screen monitor. You don't need to be a video technician to operate it, the interface is intuitive and with it's built in encoder it’s very easy to go live to multiple places at once.

Running over wifi, ethernet or 4G the YoloBox can broadcast from anywhere - alternatively you can record onto an SD card and edit or transmit later.

Mr Meana broadcasts live on Facebook on a Saturday morning from his studio, sharing a step by step guide to creating a different mural each week. With a YoloBox set up on a tripod, linked to a U-Tap, camera and microphone, he is able to create professional live video content and record his session at the same time.

YoloBox's media server manages the video streaming from the box to wherever you want to go live, even to multiple places at once, so it's easy to operate. If you can use Facebook, you can operate a YoloBox. There’s no subscription with a YoloBox, register once, put in your social media or RTMP account details you're ready to go.

In this set up the AJA U-Tap enables the audio feed to go via a small mixer, for use with Rode FilmMaker digital wireless microphones, alternatively a microphone could be plugged directly into the YoloBox, in which case the whole operation can be achieved without a laptop.

The option of running over 4G and from the in built battery means that this set up could literally be anywhere - making the YoloBox the perfect tool to have in your kit bag.

The YoloBox is already being used by thousands of people around the world to broadcast a wide range of content from weddings and funerals to yoga classes, music lessons and even the Presidential Inauguration of Joe Biden.

To find out more about YoloBox, call us on 01582 469555 for an online demonstration or check out our brand pages.