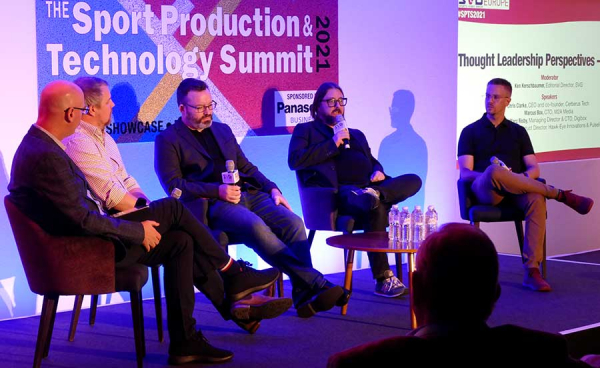 In addition, the newly appointed CTO of NEP, Pete Emminger, took part in his first public interview since being appointed, discussing his new role and his plans for the future. In addition to the conference sessions, Sport Production & Technology Summit also included the prestigious Sports TV Awards, sponsored by Canon.

Marc Risby commented "NDI, certainly for a lot of people started at the lower end, but I think it scales all the way from jumpers for goalposts all the way up to tier one now. We’ve got some of the world’s largest broadcasters doing tier one sport. It’s not always front of house but it could be commentary perhaps, or in some of the sub-services that are being run, but it certainly fits just about everywhere.

One of AJA’s recent launches was a new converter which brings you 16 channels of SD or HD or 4 channels of 4k conversion into 1U for exactly that kind of application. We are finding now that broadcasters have massive existing SDI infrastructure, 12G infrastructure, and that they want an NDI island somewhere. There are other applications where the whole system is set up NDI and if you compare it to something like 2110 it’s so much simpler, you’ve not got to roll out separate timing, PTP, discovery servers. It works on a 1Gb network that’s relatively cheap to buy. If you look at the last few months being able to roll this stuff out quickly is really what a lot of people wanted to do -how do I get a commentator working from home, and I want them to get a feed back on autocue or a feed back from the studio as well, how do I get a camera a ptz with tally into that guy’s bedroom? -Everyone is trying to do this quickly and cheaply.

Where it’s going now NDI5 was launched in the last couple of months which is really bringing in a lot of new technologies to do with the remote story. Bringing in reliable UDP to enable you to go over multiple interfaces to go over WAN networks, the idea of being able to be connected to different pools of cameras for example, in different studios in different places but have them appear on your production switcher as if they are local. There’s a remote application that allows you to use a simple bar code scanner and any laptop or mobile browser can then become an NDI source so you can use your camera, and have it appear in your production switcher as if it’s a local source. These services are just being rolled into NDI5, NDI itself is over 5 years old now, it’s not the new kid on the block in that sense. It’s quite proven – we’ve shipped thousands and thousands of cameras that are now running NDI every day in lots of productions at just about every level of sport and tv.”

If you'd like to find out more about how NDI could revolutionise your workflows contact us for a demonstration.